I've posed the question before, and more and more, it seems like the answer is an emphatic "Yes!"

While TV is still the dominant form of media, digital outdoor in general - 3D Projection Mapping in particular - creates an blockbuster experience for all within eye shot.

For the uninitiated, 3D Projection Mapping is very much what it sounds like: Projection that uses 3D technology to transform buildings, geographic structures and other (typically but not exclusively outdoor) 2D surfaces for maximum effect. I'm talking office buildings that literally come to life to astonishing effect.

Indeed, 3D Projection is coming into its own, most often used at large scale brand or campaign launch events. But more importantly, it's what smart brands do after the event that matters most. Think the kind of video that goes viral very quickly, eliciting many "oohs" and "ahs" along the way.

And no other company in North America seems to be as prolific at the art and science of 3D Projection as Vancouver, British Columbia-based Go2 Productions.

In fact, we've collaborated with Go2 on brand launch experience for  LoopNet and Seagate Technologies.

In part one of a recent interview with Scott, we talk about two new initiatives. Watch the videos featured in this post, and listen as Adrian describes what 3D Projection Mapping is, and how he and his team have even engaged other senses to create not just 3D, but 4D experiences. 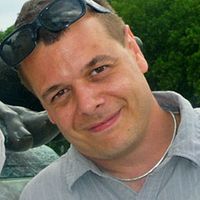 Listen in on iTunes